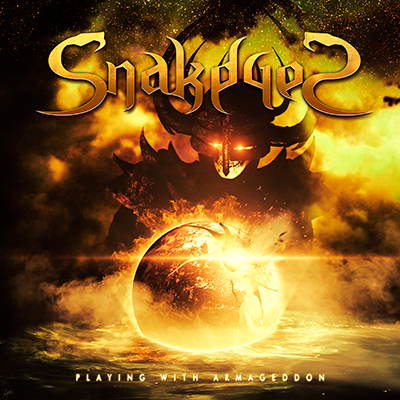 SnakeyeS, the band started by Jose Pineda, Justi Bala and Carlos Delgado (from Sphinx, the recently reunited Spanish power metal giants) and Romanian singer Cosmin Aionita, will re-release their latest album “Evil Must Die” alongside “Playing with Armageddon”, a new CD full of extra content: a new song, live performances, acoustic takes and much more.
Statement from the band:

“Playing with Armageddon” is the title we chose for relaunching “Evil Must Die”. Re-releasing an album is unusual, but we felt it is the least we could do to give new life to a record we invested a lot of time, money, and passion in. We wish to leave behind a year everyone wants to forget and to re-release “Evil Must Die”, symbolically, at the very start of 2021.

So here we are again, trying to give you the best of ourselves. We have prepared a special edition aimed at what we miss the most: the live shows, where the whole presentation and production are totally different to a studio album, giving the songs new life. An exciting, new way to enjoy the band.
After months of writing new music, as we progress into a new stage of the band’s life, we are ready to release a first sample of our next album. This new song will be a part of a the limited “Playing with Armageddon” Digipack, an extension of “Evil Must Die”, which will feature the following track list:

A preview of the band’s live performance in Seville, during our Metal MonsTour 2018, is available here

The complete concert will be streamed Saturday, January 2nd, 2021, at 8 pm CET via the band’s YouTube channel

Preorders for the “Playing with Armageddon” limited-edition pack, as well all our CDs, t-shirts and other merchandise are available on our website. Click here
As a bonus, all preorders will include a free poster and a gift postcard.

Visit www.snakeyes-metal.com for more information about SnakeyeS. You can also get in touch with us on the band’s official Facebook page: facebook.com/snakeyesmetal